The Village of the Future Short description of the measures planned.

The Village of the Future is a model settlement. The aim is to cope with the effects of climate change and population explosion. Since it is mainly the so-called Third World that suffers from these factors, it seems adequate to establish such a settlement in these countries first. However, the model could be applied everywhere in the world, because a growing world population and climate change are global factors which will eventually affect even the western industrial countries.

The first settlement, which will serve as model project, will be established in India, since all relevant factors are present there:

The country is affected by a significant growth of population and – due to climate change – severe problems concerning the food supply. Numerous areas are not suitable for traditional forms of agriculture anymore, which presents an existential threat for the rural population. This causes a significant rural exodus into the big cities which leads to the establishment of countless, huge slums, where people live under inhumane circumstances and in catastrophic hygienic conditions. People tend to have a lot of children because they see them as their only source of income once they are old. The average life expectancy is approximately 63 years, much lower than in western societies such as France (81 years).

Food supply is an issue already nowadays; in the future, we expect a much more chaotic situation caused by the fight for food. This fight for survival is a consequence of food shortages caused by climate change and the significant growth of world population.
On the national level, we have to expect riots and maybe even civil wars in the countries affected. On the international level, wars for the remaining resources among different countries are a quite realistic scenario. India could be one of the first countries to be affected by this development, which makes it absolutely necessary to react quickly. It is the only way to achieve a system of society which also takes into account the needs of future generations.

This is where our project comes into play. The aim is to change the pyramid-shaped population structure (according to age) to a parabolic shape. For this purpose, it is first and foremost necessary to reduce the birth rate. Also a well-balanced ratio between agricultural land and total population has to be taken into account. By improving the local medical standards, we aim to achieve a survival rate similar to the one in western countries.

With the problem of overpopulation being solved, it is way easier to fight issues such as malnutrition, bad hygienic conditions and insufficient pension schemes. These measures would lead to the above-mentioned parabolic population structure. For India, we have foreseen a regional system which is based on the form of a mandala. The city or metropolis in the center is surrounded by Villages of the Future. Businesses, industry, universities, hospitals etc. are – as usual – located in the city. The villages are supplied with technologies and completed products from the city.

At the same time, the Villages are responsible for their own supply of basic foods and energy; however, each Village submits a fixed amount of these resources to the central city, where it is not possible to produce energy and agricultural products on a sufficient level. The local structure will also have the form of an Indian mandala. A mandala is actually a symbol for the entire world, but it can also be transferred on other structures, e.g. on the entire universe, but also on regions or settlements. The mandala stands for positive energy, thus, it is a great symbol for the concept of Villages of the Future.

The most significant aspect about the mandala is its symmetric structure. In the center, we see the gathering or market square, which is also the center of village life. It is surrounded by a ring of public buildings, another ring of service buildings, and finally the residential areas. The periphery consists of farmhouses and granaries. Finally, the area is surrounded by a forest. According to the form of the mandala, there are four clearings on the four cardinal points which serve as entrances of the village. In order to determine the ideal area structure, it is essential to calculate the areas necessary for food and energy production. A village is supposed to have approximately 1,150 inhabitants. Assuming an average-quality soil, we need a total area of about 355 ha per village; the area is supposed to be divided into the following sub-areas: The village itself needs around 3 MW for its own supply; thus, up to 8 MW could be exported to the central city. Depending on the location and on    climatic conditions, these figures might, however, vary greatly.

The settlement consists of different types of buildings, that do not have any form of energy-intensive air conditioning. Only ecologic and regional building materials such as clay and natural stones are used during the construction.

Type A: public buildings such as schools or administrative buildings;

The buildings are positioned taking into account the position of the sun. Thus, they provide a high level of climatic comfort (thanks to shading, air circulation, moisture regulation and comfortably-sized rooms with private areas). Each house provides sanitary facilities such as dry toilets; the collector panels ensure the warming of the service water. 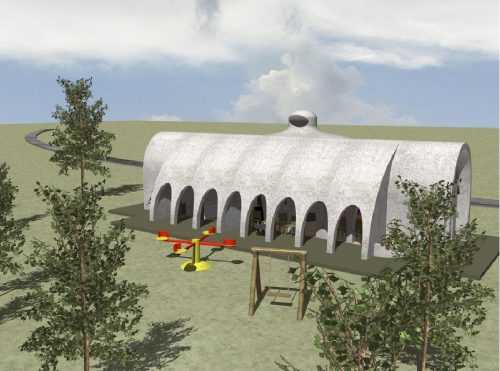 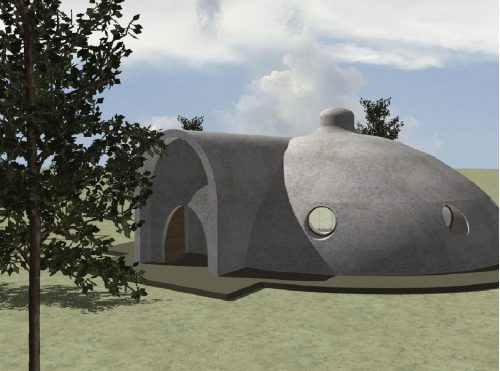 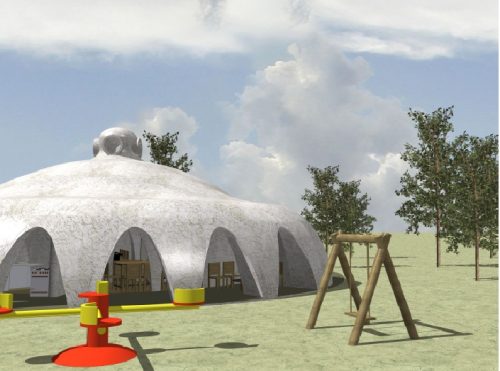